Today, May 1st, International Workers’ Day, twitter has been alive with chat of #talkpay. An article in ModelViewCulture requests that we share our current salary, title and experience to combat systemic pay inequality. Though I don’t agree with everything in the article, I’m choosing to take part. 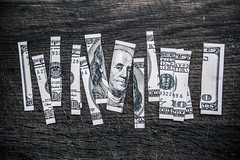 There’s a huge social taboo against sharing salary here in the U.S. The topic of complete salary transparency has been a topic that I’ve been discussing with friends and coworkers for many years so I approach it with a great amount of trepidation.

I fear violating the social mores and the possible consequences. I fear revealing competitive information about my company’s business model. I fear the power of other individuals interpreting my experiences and the arbitrary values that others place on me in a non-flattering light. I fear alienating co-workers. I fear alienating future co-workers. I also fear the reductionist aspect of a title and two numbers.

So I can’t leave it at a title. I can’t just leave it at two numbers. I have to tell the story. The reason to share this information publicly is to humanize the gap. We already have the numbers that prove there’s a gap in aggregate. Let me share my story so you know how and why I made the decisions I did and I hope you may find something of value.

The power isn’t in the numbers. It is in using the numbers effectively. It is in knowing your BATNA and anticipating theirs. My biggest hope is that these numbers inspire or help you in some way that I can’t anticipate.

Here’s my income to the best of my memory not adjusted for inflation.

What’s not covered above? All the concurrent moonlighting I’ve done from 2007 and continue to do now. Starting a local software developer meetup. Continual mentoring that’s fostered my personal and professional growth.

Family support in all directions allowing me to focus on my career. Societal norms and privileges not granted to others. Luck. Fortune. Blessings.