I’ve been wanting to write a eulogy for my grandfather since the day of his death, August 20th, 2015. For some insight into my writing process, I tend to procrastinate an incredible amount while my conscious mind comes of with bon mots that “I can’t wait to incorporate into the final product.” Ugh. 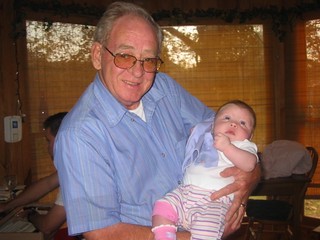 With this topic, one so deeply personal to me, I find myself overwhelmed by the tsunami of things that I want to say and what I want to convey. I want to do honor to him as a person, to what he means to me, and to help me process the closest death I’ve yet experienced in my thirty-six years on this earth. But in the interest in preserving as much of my memory of him as I can I’m going to enumerate everything as quickly as possible.

I learned so much from my grandfather, Jim Bowen Crumbley. I only realized the depth of his legacy for me due to the time I’ve spent reflecting at his death.

I virtually grew up with my grandparents from birth to age eight years as we lived a couple of blocks away from each other in New Orleans. My Dad captained a shrimp boat for a few of those years and any time he was offshore on a two week expedition, we’d live at my grandparents house.

One of my earliest memories with Grandaddy is being tasked with bringing him his morning coffee. They lived on MacArthur Boulevard and Memaw would hand me his coffee cup and I’d stare that thing down as if my life depended upon it. Each wiggle and perturbation of coffee would slow me down as I tried to gentle the liquid’s agitation.

I learned about the value of hard work and the importance of keeping my possessions nice as I watched Grandaddy meticulously scrap red mud off his shoes to keep them nice. I heard about stories like the following.

I learned that Grandaddy would gladly walk five or six miles to visit friends. He would lay down on the middle of Hwy 138 to warm himself up on chilly nights when walking back home. He once gave directions back to Atlanta to a lost airplane pilot who landed on Hwy 138. He always knew his directions.

I learned what love is from him. There’s many people who’ve helped teach me what it means to love. To forgive. Every Christmas holiday, the joy Grandaddy exuded handing out his envelopes full of money to each family remember reminds me how much I’m going to miss him. The forgiveness in his heart that shown through his eyes when I fried his computer’s motherboard installing RAM backwards (this was way after I should’ve known better 😊). The pride in his smile when he shook my hand on the day of my senior piano recital and slipped me a $50 bill. The conviction in his words and actions when he taught me these last years of what “in sickness and in health” actually means standing by his wife of sixty-two years. The sweet giggle of victory when he beat me at checkers because he had forgotten the rules of chess. The pure pleasure and sheer fear of speed I learned while riding with him and from watching him race go-karts. Hearing his story of middle school shenanigans where the girls convinced him to climb out of his room.

Learning of segregation and the racial dynamics that existed without question in his youth blew my educated mind and helped cement my feelings on inequality and power dynamics and the importance of doing what I can to make a difference and rectify wrongs. Hearing of his wreck as a thirteen year old while driving around an older African-American worker. He worked at his Uncle’s grocery store. Hearing about his youth growing up in Brunswick, Georgia as his mother and father worked and contributed for the WWII effort.

Eating late night desserts with him and Memaw. Watching him drive a tractor at breakneck speeds while bush hogging the pasture. Watching him watch the construction of the go-kart track. Watching him play with my kids and sing him songs to them.

I won’t regret the time spent with my kids, their kids or my family. And they won’t either. I miss you Grandaddy.