Last night, I had a dream. I dreamt of a woman so strong that she let love conquer death just to console her grandson. In my dream, she had yet to realize she had passed over to the other side and worried about giving me hugs and comfort. 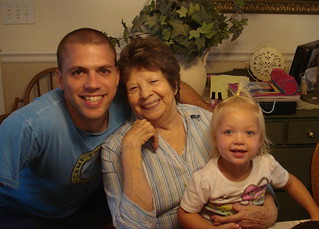 It was a year and two days ago that my grandmother, Memaw Crumbley* nee Callie Ann Price, passed away. I know exactly where I was when it happened. I was sitting in a meeting room at Peachtree Medical Billing. My mom texted me to let me know that it wouldn’t be long. I left as soon as I could and made it to her house about twenty minutes after she passed. I tell you this not for you but for me. This isn’t the important part. This is the cathartic get-it-out part.

Over a year ago, I wrote a eulogy for my grandfather who meant a great deal to me. I don’t remember how difficult it was to write the eulogy for Grandaddy now but it seems easy in comparison. I was able to write it within the first month of his passing. The words came easier somehow**.

I shared with a friend that just this past month I finally had the right words to begin working on my eulogy for Memaw. She expressed confusion as I hadn’t shared any news of anyone passing recently. It has taken me over a year to find the thoughts that feel right to me. Hopefully, they translate into words and resonate with you too, dear reader.

Alzheimer’s fascinates me. When my family first moved to Georgia, we did so to move in and take care of my great-grandmother, Thelma Crumbley, my grandfather Jim’s mother. She was in the earlier to mid-stages of the disease and we lived with her for approximately seventeen months. Ever since then, I’ve found myself focused on the concept of identity. When a physical disorder leads to the erosion of the self, what is a person? I often consider the physical processes that lead to the social and cultural manifestations of personality and identity. How does our consciousness interpret adrenaline? How does our consciousness interpret oxytocin? When we have the DSM-V, how much of that is due to interpretation versus physical processes that are no longer in balance? Are the physical processes a one way function that crosses a threshold never to return? What is a person again?

I haven’t had any answers to that question over the years but I think I’m closer to having one now. And I do find it interesting that for years I’ve considered integrity to be my most important principle.

One day in the last few days Grandaddy’s life, I took it upon myself to distract Memaw from the pain and distress Grandaddy was in evidenced by his loud, labored breathing. We cuddled on her bed spending a few hours looking at pictures and took a couple of short walks to the end of the driveway. She didn’t remember my name or who I was but she still enjoyed spending time with me. When I broke down in tears of grief, she still had the strength and compassion to comfort me. Her verbal communication was essentially non-existent but for one brief moment she sang a portion of bee-ay-bay on the front porch to Charlie who wondered about obliviously.

We’re coming up on one of my most favorite times of the year, the winter holidays. November and December feel so special to me in large part to the warm, caring memories that Memaw engendered. She spent a great deal of time decorating and making her house extra cozy for both Thanksgiving and Christmas. She spent months crafting and creating the loving experience that I seek to emulate at this time of the year (even though I fall miles short).

*. My opinion is that Me-maw is the inversion of maw-me or mommy. I’m pretty sure that’s the first word everyone was trying to teach me and I’ve always had challenges where I want to mix up the order of syllables.

**. After rereading that post, I now know that part of the reason that I couldn’t write as quickly and easily for Memaw is that she suffered from Alzheimer’s for many years which degraded my memories of our interactions.

Here’s the last picture I took of Memaw after Grandaddy’s memorial service. 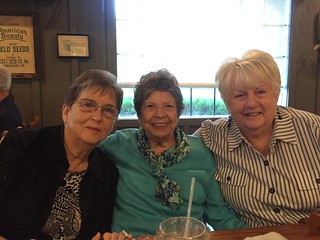